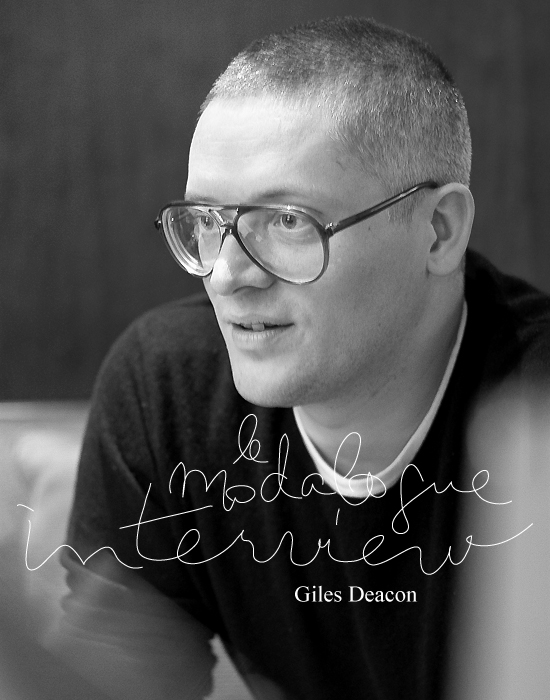 GD: I suppose it appears that may be from the outside, but Luella that I knew from St Martin’s was two year below me. I have known her for fifteen or more years. Gareth, his studio is very close to mine; I’ve known him for five years. I think it’s very different in London than it is say in Paris where people work very, very independently. There is no crossing at all. In London everyone is with each other all the time, it’s much more like a healthy competitiveness, than a kind of people are more willing to help out each other.
(1) British Fashion Award.

Me: It was the same thing with the previous generation, John Galliano, Alexander Mac Queen or Antonio Berardi?

GD: Yeah, I think it worked like that. I mean it’s…in particular with this group, kind of group you are talking about now…I was a bit of a funny one. I was in college with Alexander, Stella, but I set my own company relatively late, because I wanted to go work for other people. I worked with Jean Charles de Castelbajac in Paris, Gucci, Bottega Venetta, etc. I wanted to get kind of get experience about the cities and the way which other people work. I left college and I didn’t really know how it all worked. I really wanted to see that, I think that I really benefited me in the kind of outlook I have. I think I have, from a design perspective, a slightly different understanding of what customers and people around the world want.

Me: In 2003, you opened your fashion house. What does a designer need today to start in this business (except money -smile-?)

GD: First of all a good relationship with the bank manager who looks after your money (laughs). They need to have a very clear idea of what their esthetic is about, what they want to achieve from setting up a fashion house. I hate to use the word « DNA » that people seem to like to use, but you need to know what the thing is that you’re wanting to project.

Me: A lot of new designer are coming from London, you, Gareth Pugh… Do you think it’s easier for a new designer to start in England ?

GD: Yeah… so much easier. I think the reason is the colleges and I think the general kind of cultures in London is so diverse and it’s very ideas driven from music through to graphics, art. There’s a big interest in creativity and ideas. It’s kind of is everywhere and for some reason it seems to work. You sit and try analyzing it, as I’ve thought about it before… but I don’t really know what the answers are, but it kind of exists and it does. It’s just kind of one of those things, which is great…great for London

Me: Because there is more creativity?

GD: I don’t know if it’s that… I think that there is from an outside perspective from people all over the world, I don’t know why, there is a much bigger willingness to kind of accept something new from London than pretty much anywhere else. I don’t know if there’s lots of ideas…I don’t know, but it seems that if it’s « from London » it might be something. I don’t know, that seems to be the impression that I get. I think it’s a shame because there’s lots of great people starting up in all sorts of places that are really, really good and I think it’s all harder for them in certain worlds to get as far…you can reach a bigger audience much quicker in London, I think than lots of other places.

Me: You worked for Louis Vuitton and Ralph Lauren and they are very different in style, how difficult was it for you to adjust, question #1, and would you call it a useful experience ?

GD: I think it’s a very useful experience, if you decide to go want to go and get a job which is what the idea of what I wanted to do when I graduated from college, because you know that the number of graduates who end up working in design is tiny. I wanted to go and get experience working in other environments and you pick certain areas in your personality that you feel you have some connection with from a design perspective. It’s really important, as a designer, you should be able to understand what these different houses thing is about… and then put you take and understanding on how to design for that house. That’s why when people come and work for me and I set them a project to do, I don’t know, design some skirts or something for the collection; it’s no good if they come back and just come back with things just suitable for Comme des Garcons…they have to get an understanding of what the house is about and it’s a very, very important thing as a designer…especially if you want to work.

Me: There was in your last collection « some » Pac-Man, Pac-Man prints, Pac-Man hats… Giles are you a computer geek??

GD: I don’t think I’m a computer geek, I love all aspects of technology, and I embrace that very much so and if that means I’m a computer geek, then maybe…. The whole idea of using Pac-Man was something that came along from when we were doing fittings with Stephen Jones who is the milliner. Every season it works differently. For the forthcoming show, we’ve already designed all the hats and the clothes are going to be designed after the hats. The shoes that Christian Louboutin has done have been designed already, so the clothes will be designed around those. Whereas last season; it worked in a way that the hats came quite late in the process. The clothes were coming out quite graphic, the colors. It just worked, we played with shapes, we made these balls….and said, »They look like Pac-Man. »…then we decided, « Wouldn’t that be funny? Wouldn’t that be a nice idea? « . That’s how it came around. It wasn’t because I used to sit playing Pac-Man all the time. I like it when accidents and intuitive things come along. I like it when it’s not so all referential throughout the collection. 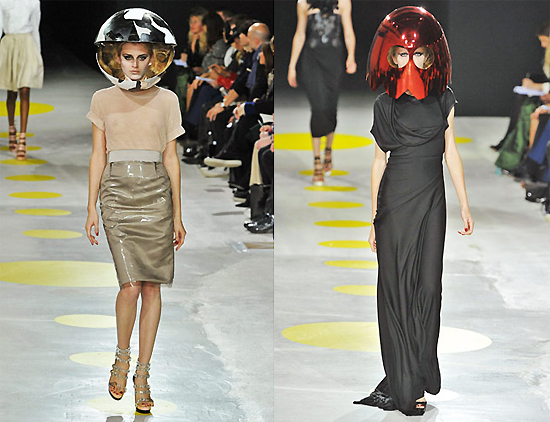 Me: I loved your prints and you mentioned graphics… Do you work with graphic designers on this collection?

GD: Yeah, every season I have. There is this guy called Rory Crichton who I’ve known for a long, long time and we work very closely together. Again, there is no set format of how we do it. Sometimes Rory will come along to a fitting and we’ll discuss things…tear sheets that I’ve saved over a period of time or things…might be something we see today, see something take a photograph of it, print it out. We keep big archive books of just images of things. You intuitively feel certain times, certain things feel right. Let’s do an abstract camouflage or something. It just works like that or Rory could have an idea of something that he maybe wants to do, some ideas he’s had and then we’ll design something for the print. So, it can work in many ways, which I really like, it keeps it fresh and the ideas exciting instead of seeing reams of ready to buy prints. I really like designing them. We work really closely on that.

Me: On the subject of that collaboration, today there are many cases of such a types of collaboration. There is Rei Kawakuko working with H&M and now you have architects that design shoes, illustrators that draw dresses and clothes. Do you think that’s a good thing, creative and positive or does it tend to makes things more common place?

GD: I think it’s a really good thing, I’m all for people trying to experiment in other areas of design. I think that designers and inherently creative people don’t like being compartmentalized. I think it’s great that people have got the opportunities to test other things. Some may work, some may not. Reach out to a larger audience to see ideas and creativity which can only be good things. It’s good as long as you retain the core values of what you are about and work really hard on that. I think it’s essentially a really good, interesting thing.

Me: About the internet, do you read fashion blogs? Do you know any of them?

GD: I go on a couple, yeah. I have a look on style.com. I have on look on boingboing. I often get to them by looking for something. This friend of mine does one blog on shoes, which is quite interesting.

Me: So you don’t specifically read fashion blogs?

GD: Sometimes, not everyday, no. But I do read them. I don’t follow them like a newspaper every day, it’s when researching or looking for something then I kind of get redirected around.

Me: Do you think internet is going to affect the relationship that people have with fashion, in general?

GD: Yeah, it increases your speed of seeing things, doesn’t it? You can see much quicker all around the world what’s going on. If you want to find out what’s going on in Reykjavik or Buenos Aires you can go in there and find things or find new stores. So, yeah… one thing that I do think is that it’s another channel for ideas to be seen.

Me: Isaac Mizrahi has asked web-surfers to send him some designs for a customized tee-shirt, then he’ll choose one and he’ll put it on his show and promote it. What do you think of this?

GD: Yeah, it’s great, it’s great fun. It’s brilliant for people to get access to things; you choose to enter the competition. It’s a bit of an interesting idea.

Me: What’s the last thing that struck you ? A movie, a picture you saw, trip you took?

GD: I was in Venice before it started flooding, about 7 to 8 days ago…which is really fantastic and I always really love going there. I was in Moscow the week before that, which I had never been to, which was really incredible. Kind of fascinating on lots of levels: of seeing the super amount of money to the complete lack of money. A very different dynamic to being in a European city, the way that everything is done. It’s really quite extraordinary; I’d like to have bit more of a look there. But in regards to a film, there was an interesting program on the television called Survivors. It’s about a group of people who find out that they are all alive after a large epidemic has wiped out a large amount of the population and I thought it was quite fascinating on how you would start dealing with all of that, it was pretty thought provoking.

GD: Future projects…well, the collection which is paramount…and we do pre-collection now. We are doing a collaboration with Smythson, a kind of diary. We are doing some sketches of mine put onto some the notebooks and notepads and things which are being really beautifully done and really nicely printed. Um…what else are we doing? I mean, there are all sorts of things flying around, we are doing some more sunglasses, or tons of stuff.

Me: You are a great illustrator can you draw something for me (smiles)??

GD: Can I draw something for you? Dum, dum dum, what shall I draw for you ?… All right… (sketching noises)… This isn’t an example of a great illustration… But you can have, how about… there you go ! You can have a… mask ! Cut across the dotted line… Get the scissors out when you get home… There you go ! 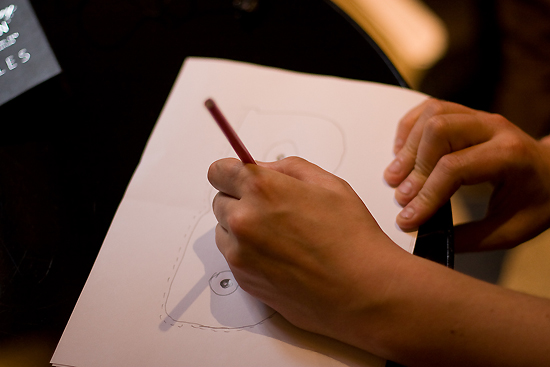